During the third quarter, U.S. GDP grew at an annualized rate of 2.5 percent, reducing fears of a double dip recession for now. In August, there were more than 4 million hiring events. That equates to 3.1 percent of the total U.S. workforce getting a new job.  In September, the unemployment rate for those with a four-year degree fell to 4.2 percent and the unemployment rate for those who most recently worked in a management, professional or related occupation was just 4.4 percent.

That is good news for a lot of people—namely those with jobs in fields that require specialized experience and education. But there are also nearly 14 million jobless Americans who want and are searching for a job. The average duration of unemployment now exceeds 40 weeks, excluding those who have taken part-time work or given up searching.

“The country emerged from recession more than two years ago,” says Rob Romaine, president of MRINetwork. “The stock market has in large part returned and corporate earnings are at record highs, but everyone—both consumers and companies—are behaving as if we are still in a recession. Consumers continue to delay purchases and companies are choosing to sit on record amounts of cash rather than invest in resources and human capital.”

To be saving cash in uncertain times makes perfect sense on the individual level. However when looking at the country as a whole, it means hundreds of billions of dollars less in spending and the spending which does occur is at significantly lower profit margins. 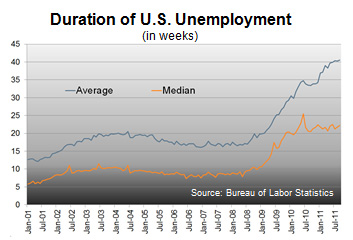 Like any vicious cycle, this one needs to be broken. Yet, nothing will happen overnight and it might not be possible for there to be one bold action from the government or one strong economic signal from the economy to fix everything.

“This cycle will be broken on the individual level. Individual companies will look at their business and say, ‘despite the macroeconomic outlook, our business is sound and we need to invest to make it better,’” says Romaine. “Unemployed individuals will also have to dig deep and reevaluate what kind of career and lifestyle they are willing to accept.”

For someone who hasn’t found a job after 40 weeks of searching, their prospects aren’t going to change because of a simple resume tweak. Most long-term unemployed are going to have gain additional skills while lowering their salary or title expectations more than they ever thought possible to rejoin the workforce. Yet, these are the individual sacrifices which will break the cycle.

“Coming out of this there hasn’t been and there won’t be a ribbon-cutting moment, just a long series of small decisions that will slowly turn the tide,” says Romaine. “Companies who don’t invest in talent and resources will lag the recovery cycle and eventually fall behind their competition.”