Economic Outlook is Modest, with a Chance for Surprise

In the final moments of trading on the final trading day of the year, the S&P; 500 dipped .04 points into the negative for the year, or -0.0032 percent. In many ways it seemed like a fitting conclusion. The questions and concerns that investors, consumers, employers and employees faced in the United States and abroad over the last year have been both foundational and astronomical in their scope, with many left unresolved.
In Europe, a growing chorus of critics has brought into question the future of the world’s largest currencies. In Asia, countries with a massive slice of the world’s global population have started to remove the term “emerging” from their economies’ status. Many Latin American countries, for the first time in modern economics, seem to have survived a crippling global downturn with successful monetary policy. In the United States, we saw a credit rating agency report that America’s debt, for the first time in more than 70 years, was not without risk and economists began to build economic models for how the global economy might function without the U.S. at the top of the pile. 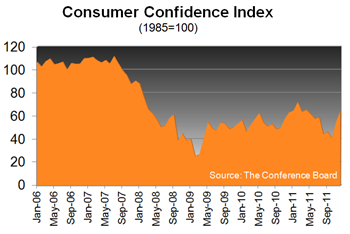 “For the last few years, we’ve gotten to December, looked back and had to admit it wasn’t as good a year as we were hoping it would be. Now, no one wants to risk being too positive about 2012 and what it could mean for the economy and jobs,” notes Rob Romaine, president of MRINetwork. “At the same time, there is enough information to at least say, ‘this is one that could surprise us.’”
A recent survey by the Conference Board said consumer confidence rose from 55.2 to 64.5 points between November and December, while its Expectations Index rose from 66.4 to 76.4 points. The Conference Board also cautioned against optimism while reporting a 1.28 percent increase in its Employment Trends Index from 102.42 to 103.7.
“In the management and executive ranks, we’ve seen an increase over the last six months of employers seeking to back-fill positions vacated because of resignations, showing an improvement in the portability of talent in the labor market,” says Romaine. “Employees are finding and accepting new jobs, and their former employers are discovering they can’t leave those positions open.”
Top employed candidates sticking their proverbial foot into the labor market have added to the pool of available talent over the last half of the year. The demand for candidates has also increased, with the number of job postings calling for a bachelor’s degree having risen by nearly 20 percent in the last year. Many employers’ processes for screening and interviewing mid- and senior-level candidates has continued to elongate and the amount of time top candidates remain on the market has actually shrunk, while multiple offers have increased in frequency.
“There aren’t any large single events on the calendar in 2012 that are going to take up the slack in the labor market, and we have no reason to expect that issues hanging over the global economy are going to come to an immediate or even a positive resolution,” says Romaine. “At the same time, there is a pretty solid foundation of reasons to suspect that the economy will maintain a modest pace of growth and that total employment will continue to slowly improve. And, there’s even a chance that the economy could do better than we expect.”