There are jobs and there are dream jobs—the roles at organizations that you aspire to join. Maybe they make a product or service that you love, maybe they have an amazing corporate culture in which you know you could thrive, or maybe they have a mission statement which you could really believe in. If given the opportunity you would drop everything, move across the country and even take a pay cut just to get your foot in the door—and as an employer there is no better position to be in.

Google is already one of those places—ranked as the best place to work by FORTUNE magazine in four of the last seven years—yet even they have turned to what some would call extreme means to further that devotion to their employer brand. A recent movie, The Internship, which takes place at Google headquarters, showcases the company’s legendary Mountain View, CA campus and corporate culture, complete with hazing, scary managers and wild goose-chasing pranks. While the movie makes light of the highly sought-after Google internship, it was seen by executives as a good way to further expose the company’s “do-no-evil” culture and get more potential candidates interested in technology, computers, and ultimately becoming “Googlers.” That such a highly sought after employer still sees the need to go to such lengths highlights the need for branding to attract top candidates in today’s economic climate. 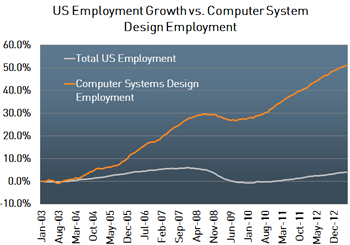 Locating exceptional talent continues to be an ongoing challenge, particularly in the executive and managerial space. Growing companies recognize the necessity of expanding resources and leadership to remain competitive, however the talent pool is competitive among mid-to-high-level executives and top candidates often need to be recruited out of current roles. Although recent unemployment data suggests a slow rebound of the overall U.S. economy due to an employer-driven market, the unemployment rate for this sector is considerably lower than general unemployment— 3.5 percent versus 7.3 percent in May. In May of 2012 those rates were 4.0 percent versus 7.9 percent, indicating that the job market in the executive recruitment space is increasingly employee-driven, making branding essential to entice A-players.

“When it comes to post-recession recruitment efforts, where companies are focused on finding the best candidates, branding is more important than ever in the search process,” says Rob Romaine, president of MRINetwork. “A concerted effort to communicate clear messaging about the company’s culture, mission, products and services, both internally and externally is key in attracting the right people. Essentially, recruitment begins well before positions are even posted.”

Considering Google’s market recognition in the technology arena, its participation in the movie underscores the organization’s insight into the technology talent pool where unemployment is lower than in other industries and the number of star candidates for potential hire is smaller. “Google’s awareness of the value of employer branding proves that even large, renowned companies must be tireless and innovative in their efforts to create, maintain and promote a corporate culture that is appealing to multiple audiences including exceptional candidates, investors and the public,” says Romaine.
Since 2003, he notes, employment in the IT industry has grown by 37 percent. According to the Bureau of Labor Statistics (BLS), during the recent recession, the industry lost only 1 percent of its workforce in 2009, but otherwise maintained employment. By 2010, employment had recovered and was higher than it had been in 2008.

How should companies develop branding initiatives and maximize these efforts for recruitment purposes? “First the organization has to be honest about its corporate culture and create brand messaging based on this premise, not the brand that it aspires to be,” says Romaine. “Second, the company should identify and promote differentiating factors that separate it from industry competitors â€“ qualities that will not only be attractive to the general public or investors, but incoming talent as well. Third, the business must constantly assess whether public perception of the company matches the corporate imaging and messaging that are being communicated.”

At the end of the day, employer branding and recruitment must go hand-in-hand to attract impact player candidates. Whether it’s for an internship or a senior-level position, company imaging and messaging are increasingly major components of the hiring process, helping ensure that employers locate talent that will not only fulfill job requirements, but will also be a good match with the company culture.