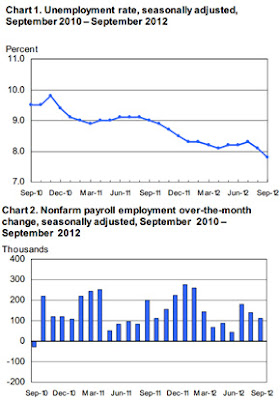 Total unemployment in the U.S. fell, according to the Labor Department, from 8.1 to 7.8 percent in September, while the economy added 114,000 jobs. Revisions to past months showed more than 60,000 more jobs were added over the previous two months than initially reported. The participation rate, which can create an illusion of falling unemployment rates when discouraged workers leave the workforce, in September actually grew by 0.1 percent while the number of discouraged workers fell by 42,000.
Total employment growth and unemployment are measured by two separate but closely related surveys; the household survey which surveys individual households and the establishment survey which surveys employers. While the establishment survey saw just 113,000 jobs created, the household survey saw more 873,000 new people reporting being employed and 456,000 fewer people unemployed. Nearly half of that growth was among workers aged 20 to 24, and about half of the total growth was in part-time positions, implying it may be part of a seasonal bump as college students seek out part-time jobs during the fall semester.
Of those with a bachelor’s degree and higher, the unemployment rate remained unchanged at 4.1 percent, but participation grew from 75.5 to 75.9 percent, as 103,000 more people reported employment. For those with just some college experience or an associate’s degree, the participation rate grew from 68.3 percent to 68.8 percent as 196,000 more people reported employment. There was virtually no growth in employment for those over 25 with a high school diploma or less.
The professional, managerial, and related unemployment rate fell from 4.4 to 3.9 percent from September a year ago, while the unemployment rate for sales and office occupations fell from 9 to 7.5 percent over the same period.
On an industry basis, which is only reported in the establishment survey, growth was spread amongst service-providing industries with no stand-out growth aside from healthcare, from which almost half, 49,000 positions, of the reported growth derived. One variation seen in September was an increase of 13,000 state education employees, which was enough to grow total government employment by 10,000 during the month, the first time that sector has seen such growth since the 2010 census.
While the report was one of the most positive in several months, it is tempered by a variety of factors. The large rate of part-time employment growth means a relatively small amount of consumer buying power is being added to the market. Furthermore, recent revisions of the U.S. GDP rate showed an annualized growth rate of just 1.3 percent in the second quarter, meaning projections of up to 1.9-percent growth in the fourth quarter will likely be revised down. Perhaps most cautioning is a similarity to 2011, where we saw a strong second half of the year, only to be followed by disappointing numbers in the new year.