In June, total job openings in the U.S. grew to 3.76 million, according to the Labor Department, the highest level since the summer of 2008. In the past 36 months, job openings have grown more than 70 percent, far surpassing the recovery following the last recession, in which job openings grew just 47 percent in the same time frame.

“Enough confidence has returned to the market that most employers have lifted blanket hiring freezes and are expanding the range of positions they are working to fill outside of those directly tied to incremental revenue,” says Rob Romaine, president of MRINetwork. “We are seeing search activity growing across more functions, but actually making that final hiring decision among most employers has only increased slightly.” 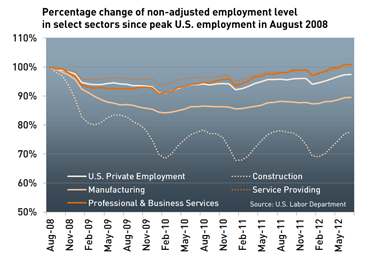 Recruiters continue to report that hiring processes have been drawn out by managers having unrealistic expectations of candidate credentials and experience in the current unemployment situation. Yet, evidence shows that the top candidates such managers are looking for are more likely to reject offers the longer the hiring process becomes.

“In the recruiting industry, we talk a lot about the importance of having a streamlined interview and offer process regardless of the state of the economy because while there is high unemployment, there is also a growing talent mismatch in the United States. What this means is that while there are plenty who are unemployed, there are still very few who fit the needs of a given pasteurization in the professional space,” notes Romaine.

In nominal, non-adjusted numbers, total U.S. employment peaked in August 2008 and fell precipitously for 15 months, reversing course in January 2010. In that time, nearly 11.5 million jobs were eliminated. The professional and business services sector-about 13 percent of the U.S. private workforce-lost nearly 2 million of those jobs. The construction industry, which represented less than 7 percent of the private workforce, lost 3 million jobs from peak to trough.

In the two years since that employment trough, the professional services segment of the workforce has returned all but about 200,000 positions. In fact, the much broader U.S. service providing sector, which accounts for more than 80 percent of the 113 million U.S. private sector jobs, has recovered all but about 300,000 positions. Of the 4.2 million-job decline since the peak of U.S. employment, half of those positions-2.1 million-are in construction, and another 1.8 million are in manufacturing.

“With today’s levels of advanced training, certifications, and degrees it can be difficult to move between even similar career paths quickly,” says Romaine. “But going from a factory floor or construction site to a professional office job is such a fundamental change that it requires both training and a veritable career restart. Such a change of course is possible, but the availability of such workers does little for employers looking for experienced professionals today.”

It could take several more years for the mix of skills in the U.S. talent market to properly recalibrate. In that time, unemployment will remain heightened while the skills of the workforce move to more closely match the requirements of job openings today.