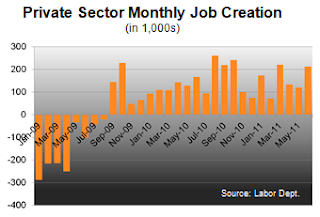 “Everyone is hearing about continued debt concerns in Europe, but when it comes to not hiring in America, it’s used as an excuse not to hire, rather than a reason,” notes Rob Romaine, president ofMRINetwork. “Except for companies with heavy exposure to the European market, businesses are making hiring decisions based on the customers walking through their front door, not uncertainty surrounding sovereign debt an ocean away.”

A recent survey of MRINetwork recruiters noted an increase over the last six months of employers backfilling positions that had been left unfilled for two years or more. As one respondent said, “I believe [employers] cut so deeply over the past two years that productivity has suffered. Today, they are hiring out of necessity and a belief that the economy has begun to turn.”

The evidence that the economy has turned is mounting. According to the Bureau of Economic Analysis, the U.S. economy grew at an annualized rate of 2.8 percent during the fourth quarter of 2011, the fourth consecutive increase. Total GDP growth in 2011 measured 1.7 percent, not a rapid rate of growth, but a far cry from projections of a double-dip recession.

Such growth numbers are, compared to past periods of recovery, rather weak. Yet, most important is where the growth is coming from. In 2011, MRINetwork saw placements in the construction space grow by nearly 50 percent, industrial placements by more than 30 percent and consumer products and services by more than 20 percent.

“Increased hiring of senior-level talent in these sectors is promising for the general economy,” says Romaine. “It indicates a confidence and a willingness by employers to invest in talent across broad swaths of the economy despite headwinds that still persist.”

But just as employers seem to be ramping up their hunt for senior talent, the availability of such talent may be shrinking as well. Over the last six months, employers have continued to increase their use of counter-offers, hoping to retain top talent long enough to backfill their positions. In highly technical fields, such as chemical engineering or biotechnology, employers have been forced to sweeten counter-offers because there simply aren’t as many candidates as there are job openings.

Indeed, the unemployment rate for those with a bachelor’s degree or higher—perhaps the broadest definition of the skilled, professional workforce—fell in December to 4.1 percent, its lowest rate in nearly three years.

“A full-blown, double-dip recession in Europe could have a chilling effect on hiring in America. But, until it does impact the U.S. directly, businesses are beginning to return to more normal hiring patterns,” notes Romaine. “Companies are backfilling vacancies and investing in new positions. We are in the midst of the slow, but seemingly stable, rebound that had been projected.”

Over the past several months, private employment in the U.S. has begun to rebound in an increasingly strong way. Through all of 2011, the private sector averaged 160,000 new positions per month, exceeding the monthly rates of population growth (about 140,000) and labor force growth (only about 20,000).