Perceptions of the Job Market Lag the Numbers

Michigan is often thought of as an economically stagnant part of the country. Its unemployment rate is one of the highest of any state. It is home to the Motor City which is in perpetual decline and has become shorthand for America’s economic vulnerability. Yet, Michigan added 79,000 jobs in the last year, 25,000 more than New York, which has a workforce more than twice the size of Michigan’s. The state’s unemployment rate, while still in the double digits—10.3 percent—is down a full 3 percentage points in the last year. 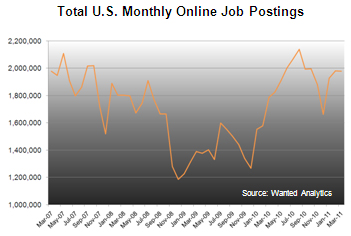 One of the worst effects of a deep recession is that when the economy does improve, people don’t recognize it. The current recovery—if it is even being described as one—is labeled as anemic, fledgling, or jobless. While over 13 million people remain unemployed, during the last four months, the economy has averaged close to 240,000 new jobs a month. During the most recent period of expansion—2003 through 2007—the economy averaged 160,000 new jobs a month.

“When people refer to ‘today’s economy,’ few people think of that as a positive thing. Yet, by more than a few metrics, today’s economy is growing,” says Rob Romaine, president of MRINetwork. “In the last six months, while unemployment is high, it is one of the last remaining negative measures of our economic situation.”

The Conference Board’s index of leading economic indicators, which was set at 100 points in 2004, after falling throughout the recession, rose to 114.1 points in March and has grown rapidly since October. One of the only components holding the index back is consumer confidence.  A recent New York Times/CBS poll found that less than a quarter of Americans think the economy is getting better, yet, in at least a technical sense, the economy has already been growing for over a year and a half.

“In recent months, we’ve seen the pendulum start to swing from an employer-driven market to a candidate-driven one,” says Romaine. “We are seeing conditions in the labor market today that haven’t been visible since early 2007. Candidates are receiving multiple offers, more aggressive counter offers and are increasingly being tempted with more impressive perks and incentives.”

According to Wanted Analytics, a job board analytics company, U.S. job postings are up more than 10 percent from a year ago. Some bellwethers, like postings for HR positions, grew by more than 30 percent and heavy tractor-trailer truck drivers—a harbinger of shipping demand—surged more than 180 percent.

“Companies that are hiring today tend to think they are on the leading edge, when in truth they are increasingly the norm,” notes Romaine. “As the most recent earnings season has shown, many public companies’ revenues are good and their margins are even better. Yet, behind those numbers are employees who are overworked and have had to take on the responsibilities of those who were laid off. If companies don’t hire to ease their burden, their best people stand to be lured away by other organizations.”

Romaine continues, “Corporate and consumer perceptions of the economy tend to lag the actual situation, which makes strategic planning difficult. Companies planning to get a jump on hiring before the competition are already at least a few months late.”

Provided by ETS Dental and MRI Network. Check us out at www.etsdental.com.