Reaching Top Talent as a Path to Growth

The recession and broader economic slowdown have given business leaders the cover they need to make sweeping changes to their business structures. For some, it has meant sending core processes overseas, for others, it has meant investing in technology that would automate tasks once carried out by humans. It’s why in the depths of the recession, economic output per hour worked actually skyrocketed, growing at over 5 percent for more than a year. 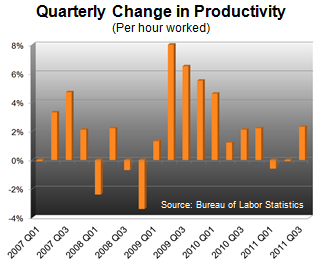 After a decade of lightning-speed technological advancements, the recession was a well-placed opportunity for businesses in almost every sector to look for ways to streamline their processes and improve efficiency. It allowed many companies to mitigate the impact of the recession on their bottom lines. Yet, the law of diminishing returns means these methods will only work for so long. Eventually, growth will need to come from growth.

“You would be hard pressed to find a company that has managed long-term growth without investment. That investment normally needs to begin with human capital,” says Rob Romaine, president of MRINetwork. “After a deep recession that affects people at every level, trying to expand through increasing workloads can be counterproductive as employees are pushed past their tipping point, leading to increased turnover.”

New hires intended for growth, however, can be some of the most difficult. As a company expands laterally, or even horizontally, new positions with unique qualifications become necessary. Existing in-house recruiting pipelines can often fall short of meeting the demand of new pools of candidates required.

When an organization creates a new position, it calls for a very different type of candidate than if the position was already in existence. Finding the types of candidates ready to take on such a task frequently, if not exclusively, requires reaching deep into the workforce of current and would-be competitors to find people who can not only do the job, but define the job.

“The type of top talent you want to recruit aren’t going to answer the phone when a competitor calls them – much less be actively applying to job openings – automatically screening out some of the best new staff you could bring aboard,” notes Romaine. “That exact same candidate though, will likely not only take a call from an industry recruiter; they may already be working with one.”

Acting as a third party, an industry recruiter can work with hiring managers not only to create what the job description for a new role might look like, but also help them understand what types of candidates are already in the passive candidate market. They can map out a search strategy to identify, screen, and eventually recruit the correct person.

“The most effective employees are almost by definition the most engaged. They are invested in their jobs and aren’t actively considering other employment. But it’s also not going to stop them from taking a look when an opportunity arises,” says Romaine. “In recessions and boom times, these passive candidates end up being the most consistently successful and effective hires a company can make.”

For companies that have already made all the easy fixes to productivity, growth in a sluggish 2012 economy may only be found through investing in growing workforces and recruiting top passive candidates.