“The only reason the [talent market] is candidate-driven is because the candidate pool is very weak of the top performing individuals. Companies want the ‘Superstars’ today. Average employees are not being hired,” said a recruiter responding to the most recent MRINetwork Recruiter Sentiment Study. According to the report, in the first half of 2013, 68 percent of recruiters characterized today’s labor market as candidate-driven, up 12 points from a year ago. Strikingly, it has become not uncommon for LinkedIn profiles to tell would-be employers to go knock on someone else’s door.

“It’s a candidate-driven market [for those with] specialized skills and [who] are viewed as on the way up in their career,” said another MRINetwork recruiter. “It’s an [employer]-driven market for commodity positions.”

While experienced professionals at the top of their game are, almost by definition, few and far between, some recruiters noted a new trend emerging. For example, early career professionals, those with one to five years of experience, are becoming increasingly difficult to find. The reason isn’t hard to figure out. Since many employers have held back on filling entry-level positions for the last five years, fewer people have had the opportunity to start their careers over that time. The unemployment rate for those between the ages of 20 and 24 years old is 13.7 percent, nearly double the rate of those 25 to 54 years old 6.7 percent). 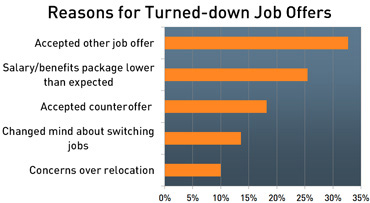 As one recruiter noted, “Hiring is always buying and selling for all parties. [Employers] need to be reminded sometimes that it is equally as important to vet a strong candidate as it is to sell them on, ‘Why us.’” Today, top candidates have other opportunities that they are either actively pursuing or know they could pursue.

According to the study, of candidates who rejected offers during the last half of 2012, one-third accepted another job offer while 18 percent accepted a counteroffer. In 2012, counteroffers appeared to grow in frequency and veracity, possibly because hiring authorities, growing wise to the difficulty of finding top talent in this marketplace, opt to provide generous counteroffers rather than risk starting with someone new.

“Recently, we have had candidates receiving counteroffers. We are dealing with top prospects here, but only lately have [they appeared] good enough to be accepted. Prior to Q4 [2012], we hadn’t seen a counteroffer worth accepting in four years. That has changed now,” said one respondent.

The results from this study clearly do not represent the employment market at large, but rather the management and professional segment of the talent market for which MRINetwork recruiters are normally sought after to find top talent. However, even with the economy growing at a snail’s pace, the competition for this level of talent appears to be growing as the availability continues to diminish.