How long will it take for the labor markets to return to normal? It will depend on any number of factors, foremost among them: what is normal?
In a recent poll of MRINetwork recruiters asking what was holding managers back from hiring, only 11 percent cited sales not yet rebounding. The leading cause of employers not hiring was that efficiencies found during the recession have allowed companies to do the same with less staff (28 percent).
“The depth and length of the downturn forced organizations to make structural changes which have sent productivity to record heights,” says Rob Romaine, president of MRINetwork. “Today, in a period where market growth often remains minimal, the most direct way to create the earnings improvements investors are looking for is to push for further efficiencies.”
While expanding headcounts and vacancies from resignations were the two top reasons for job openings, according to the MRINetwork Recruiter Sentiment Study, top grading of the workforce came in third, with 14 percent of recruiters claiming that it is the primary cause for openings that they see. Top grading means identifying the “C players” on a team, going out, and replacing them with a top performer.
The number two reason employers are holding back from hiring, according to the survey, is that while sales have rebounded, managers are meeting resistance in getting authorization to fill their open positions (27 percent).  “Managers are having a hard enough time today just getting approval to fill vacancies, let alone creating new positions,” notes Romaine. “This makes top grading one of the only ways to increase output in highly talent-reliant businesses without changing the headcount.”
Top grading is possible today in a way it hasn’t been over the last many years. The mantra in the depths of the recession was that employees were hunkered down, not wanting to risk falling victim to the “last in, first out” mentality at a new job. Yet, while layoffs do continue today at many firms, they are more frequently motivated by shifting business strategies rather than financial necessity. 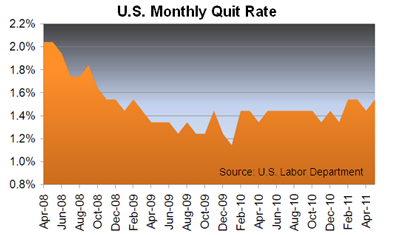 After hitting its low in January 2010, the U.S quit rate—the percentage of the workforce who voluntarily leave their job in a given month—has risen from 1.1 percent to 1.5 percent. While still short of the 2.2 percent average between 2004 and 2007, this recent growth lends further support to the idea that for the right opportunities, candidates today are ready and willing to change jobs. In fact, the number of people leaving their positions voluntarily has exceeded the number laid off or discharged since January of this year.
“While productivity has surged, consumer and business spending has only risen modestly. Until the demand of the marketplace reaches parity with the capacity of the current workforce, we aren’t going to see a surge in headcounts,” notes Romaine. “But many of the smartest employers are taking this opportunity to find and recruit a select few top performers who will enable their companies to seize the opportunity and grow when that parity is reached.”